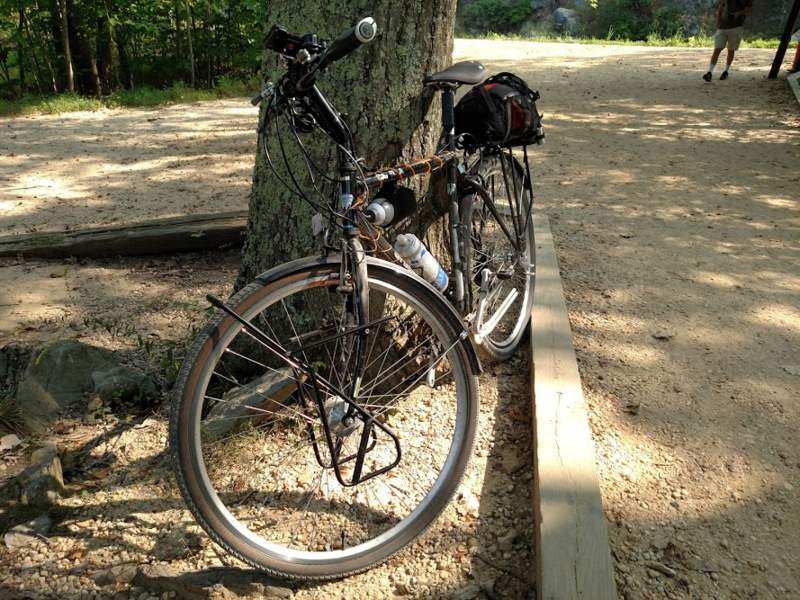 Throughout the Summer I have been quietly telling myself that I would take off one Friday and go for a nice long bike ride. As each week passed I would have plenty of excuses and the long ride never materialized. As the Friday before Labor Day was approaching, the promise to myself left unfulfilled was front and center in my mind. So on the day before I decided no more excuses. I decided on a route, put in for the leave, and basked in the anticipation for what would become the longest ride I had ever done.
The route was simple. I would start out on the Mount Vernon Trail, go into DC to have coffee with friends at Swing's for Friday Coffee Club, and then I would keep on going up the Chesapeake and Ohio (C&O) Canal all the way up to White's Ferry. From there I would cross the Potomac on the ferry, hop on US-15 into Leesburg and get onto the W&OD Trail. Around lunchtime I would take a spur into Ashburn to meet my wife at her office, then go back to the W&OD to take it to its Northern terminus in Shirlington. Then I would hop on the Four Mile Run Trail to get back to the Mount Vernon Trail, and then head back to my starting point. From start to finish, about 105 miles. 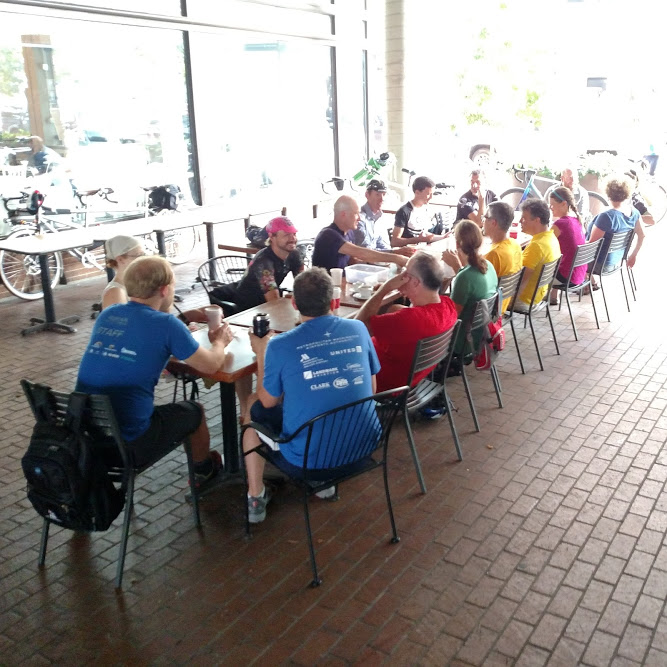 Friday Coffee Club
The first leg to Swing's was routine -- it is a trip I take most Friday mornings. I enjoyed talking with friends and got some encouragement for the trip ahead. With a big helping of coffee and pastry I fueled myself for the ride ahead. I have ridden the C&O Canal many times, but most of those times my bike was fairly heavily laden for camping along the towpath. For this trip my motto was "fast and light", or as fast and light as I get. The only things on my bike besides myself were my rack trunk (with tubes and tools for breakdowns) and my water bottle. In my estimates for how fast I would go, I looked at things through the lens of my previous adventures on the canal with dozens of pounds of gear. I was immediately surprised at just how fast I was going. My average speed was actually faster than my first leg on the paved Mount Vernon Trail. I was making good time. 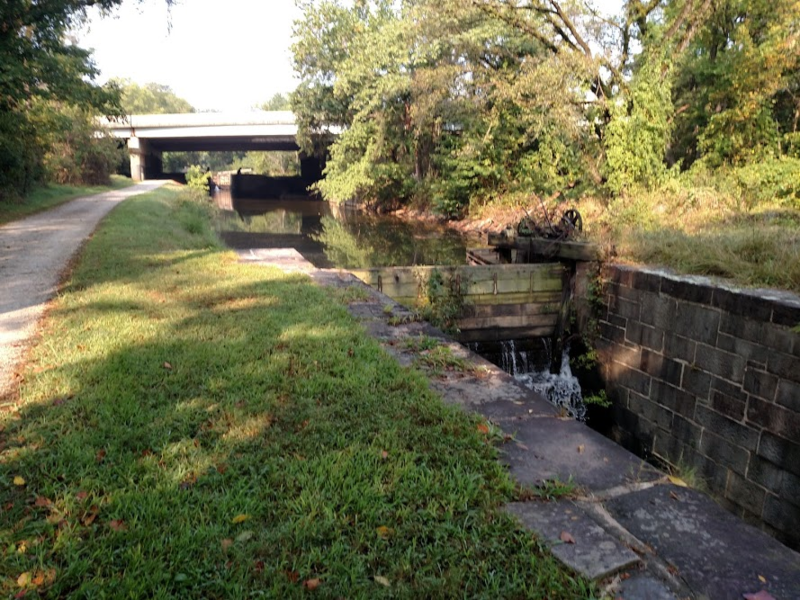 Leaving the Beltway Behind
Along the way the canal reminded me of why I have fallen in love with it each time I've followed its crushed stone pathway. The sheer beauty of the place, and the solitude under its green tunnel are a tonic for the soul. When I reached the beltway I felt the reality of the trip come into focus and felt a big dumb grin go across my face.
Onward. 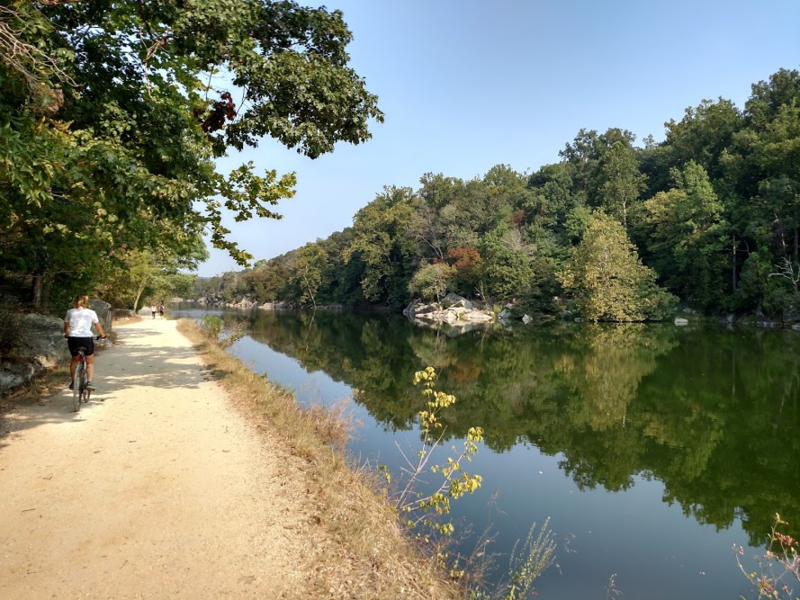 Wide Water on the C&O
There is something almost hypnotic about the sound of tires on the towpath gravel. When combined with the meditative one-two-one-two of your legs as you pedal, it works wonders for clearing your mind. I saw ducks and herons in the shallow waters of the canal and felt the warm glow of the morning sun. This was a vacation day well spent. As I continued on the towpath, I made it to Wide Water, one of my favorite sections on the canal. It feels as though you are biking alongside a rocky canyon with still waters that serve as mirror-like surfaces to make the rocky sides even more impressive. Shortly thereafter I made it to Great Falls, where I took a short break to take some photos from the bridge over the rocks by the falls and to get a cold drink from the concessionaire. After watering up, I continued on my way. 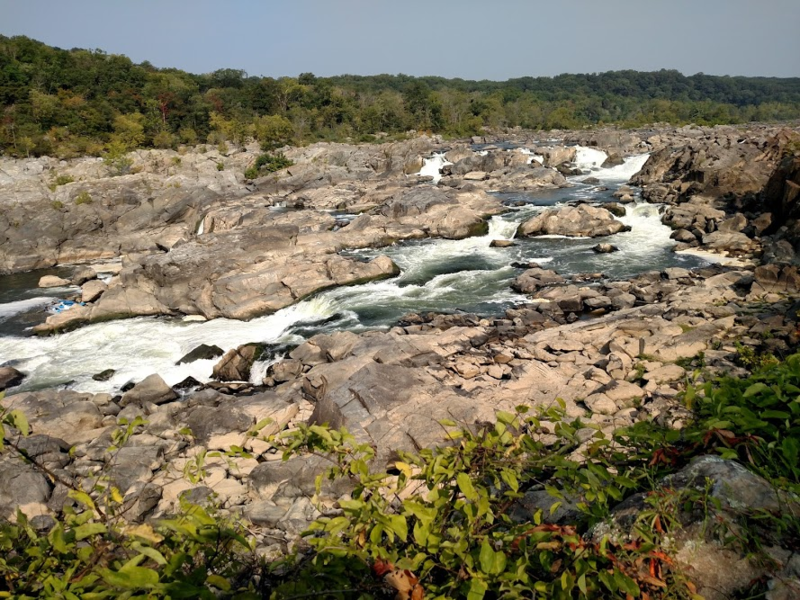 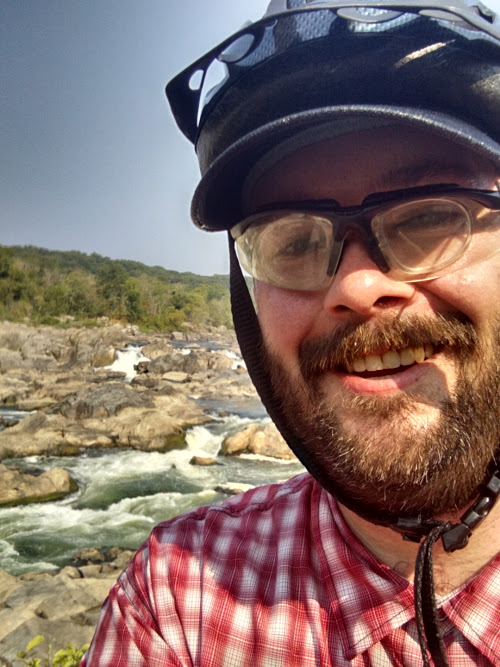 Me at Great Falls
After a few more locks, the watered section of the canal ends and nature has taken back what was once dug out for water-borne commerce. Trees filled the old canal bed and many creatures enjoyed traversing the lush green ditch. At one point I came upon three deer. Two of them crossed my path before I got to them, but a third was not fast enough to do so. She ran alongside me on the canal bed for almost a quarter mile before finally getting enough steam to pass me. It was an exhilarating ride. After that encounter the canal's green tunnel thickened and the variation in the scenery dropped by the wayside. After passing by some hiker/biker campsites (one of which was occupied later in the day than I would have expected) I made my way to milepost 35 and White's Ferry. 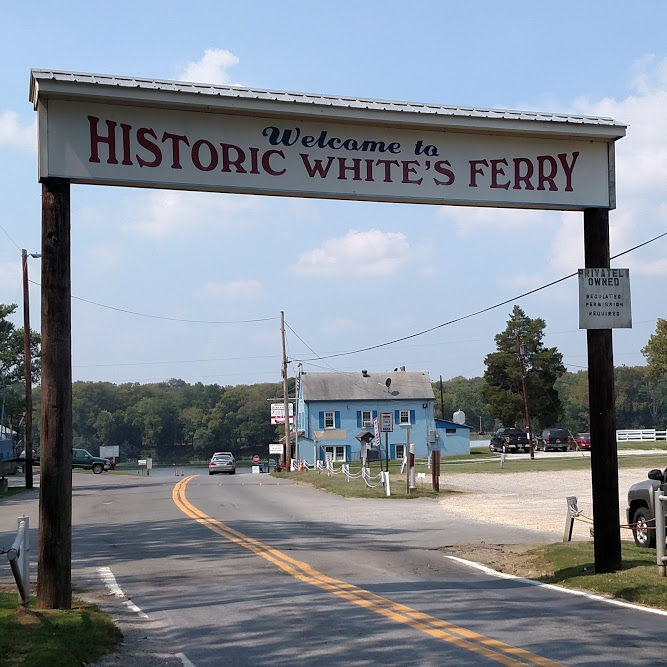 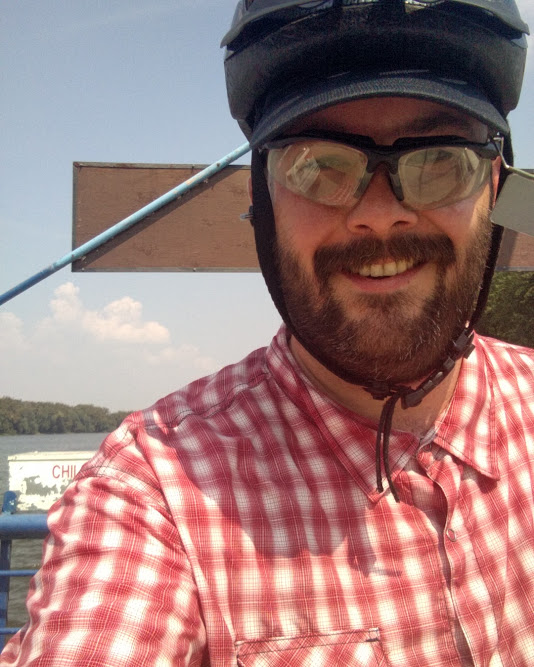 Me on White's Ferry
By this time the Summer sun had mustered its full strength to make the day sultry and thirst inducing. I took the opportunity to get some Gatorade and water from the convenience store at the ferry and enjoyed every last drop. The ferry itself was quick, efficient, and pleasant with some time to savor my recently acquired refreshment. Two dollars got me from Maryland to Virginia on the cable towed vessel and after a short but steep climb, I was on my way to US-15 and Leesburg. On US-15 there was a wide-enough shoulder that allowed me safe passage, however, once it became Business-15 that disappeared entirely. Thankfully traffic was light, motorists were polite, and Leesburg wasn't very far. Soon enough Business-15 became North King Street and then South King Street and then I turned left onto the Washington and Old Dominion Trail (W&OD) leaving motorized traffic behind.
I made some good time on the trail, and even saw Friday Coffee Club friends Ed and Mary on their tandem heading out to West Virginia. The scenery on the W&OD is not as rewarding as the C&O, but the smooth surface is a welcome change. One exception is the section near Luck Stone Quarry, where there are some impressive views of the quarry from the trail. Lunch with my wife at her office in Ashburn was waiting at mile 65 of my journey, so I didn't dally, keeping up my pace as the skies started to open up above me. As I reached Ashburn, an impressive electrical storm was commencing, and I made it to her office in the downpour where I was graciously greeted by some of her co-workers who were excited to meet her crazy husband who was making this long trek.
After 65 miles, the sandwiches, chips, and drinks that my wife had gotten for me were positively delicious. I practically inhaled them. It was so nice of her to go out and get everything for me in anticipation of my arrival, I'm lucky to have such a supportive wife. The break was longer than planned since the electrical storm showed no signs of relenting and thunder could be heard reverberating around the office. Finally, a break in the storm allowed me to head back out onto the road, retracing my route to the W&OD. 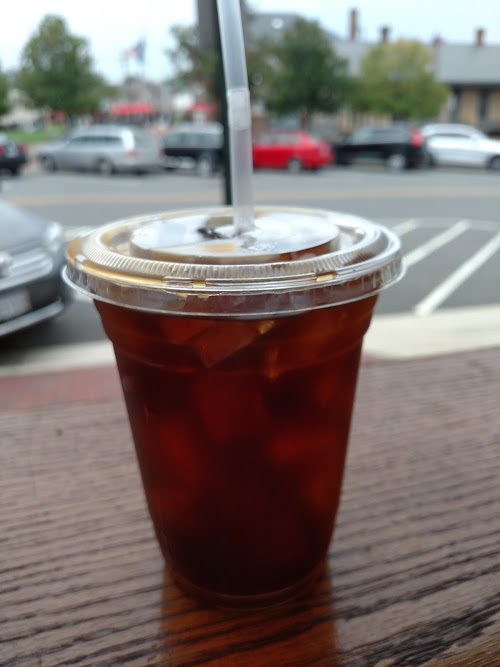 Iced Coffee at the Green Lizard
Once back on the trail there were menacing clouds behind me, so I went straight down to Herndon where after continuing to outrun the rain I made a quick stop at the Green Lizard for a delicious iced coffee. Afterward I returned to the trail and the clouds looked like they might catch me again. Thunder was heard and flashes of lightning lit me from behind, but thankfully they finally faded off in the distance behind me as I continued down to Vienna. After arriving in Vienna around mile 84 I stopped for water at one of the old train stations they have along the route. I ended up having a great chat with another cyclist named Lee while slaking my thirst who was going on his own long ride that day and rode along with me for the next few miles on the trail. 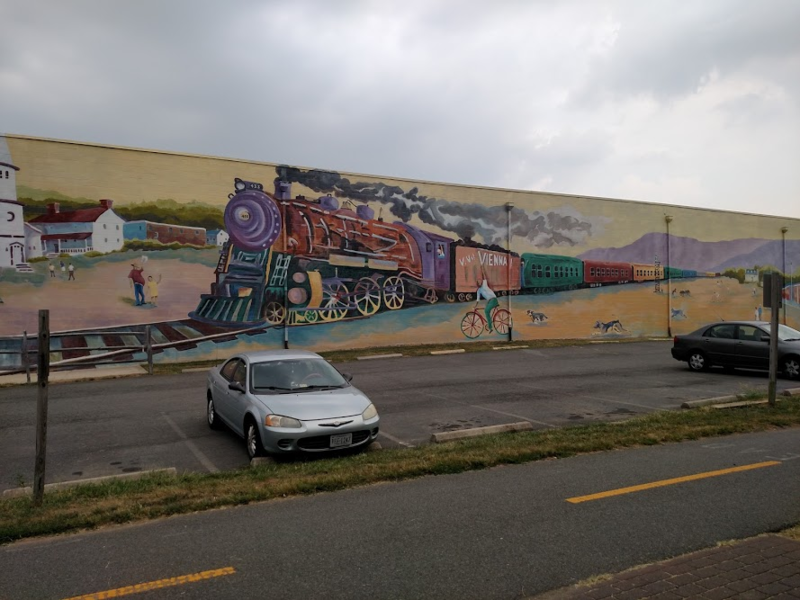 A Mural in Vienna 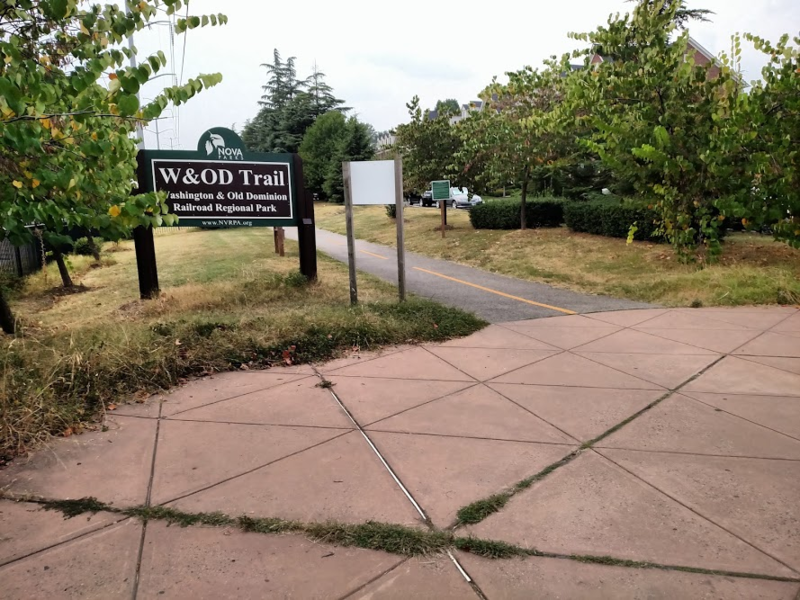 The Northern Trailhead of the W&OD
I enjoyed the descent into the Northern terminus of the trail at Shirlington and after a stop to take a picture of it, I was back on the bike and onto the Four Mile Run Trail. At this point I was starting to feel the mileage that I had undertaken on this sunny and hot day. The last few miles were on my very familiar Mount Vernon Trail, but I could feel myself slowing down as the miles made me more tired. I crossed the 100 mile mark in Jones Point Park according to my cycle-computer, and a bit before that on Strava. I took a break there to cool down and stretch and then went to Belle Haven Park to water up one last time. I decided to take my normal route with its last two finishing climbs and was happy to make it home before dark. It is the longest ride I have ever completed. 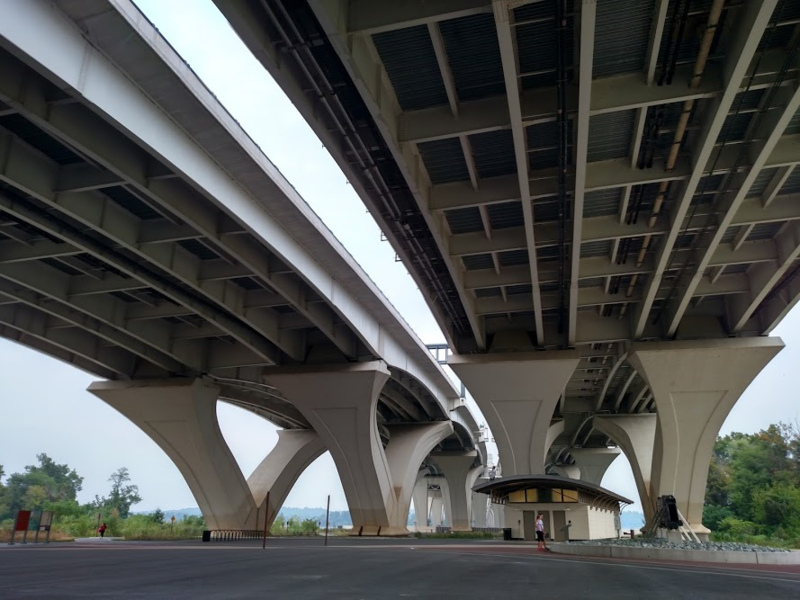 Jones Point Park
When I set out on my journey, I wasn't sure if I would be able to complete it. I had done a mostly full week of commuting in the preceding week, so I had many miles under my belt already. By the end of the weekend I surpassed 200 miles for the week. I ended up exceeding even my most positive expectations for the trip. I think this is due to my consistent riding all year and all those miles I have racked up on this record breaking year. I was surprised that while I was tired, I wasn't hurting at the end of the ride. It was great to be able to reach a personal goal and surpass my own expectations. It was definitely a fun ride. 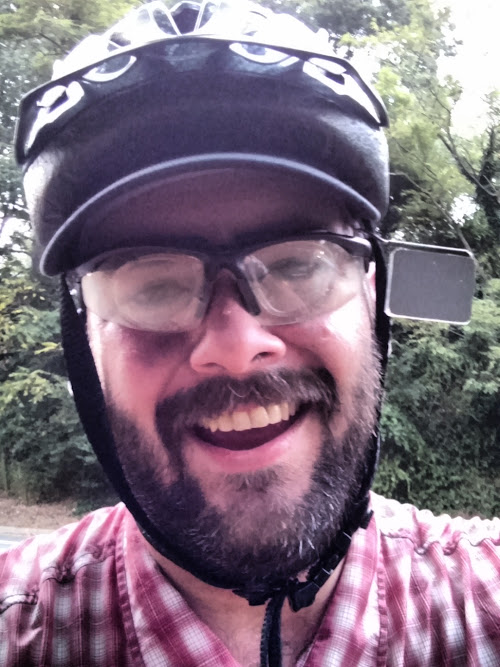 Me at the end of the ride