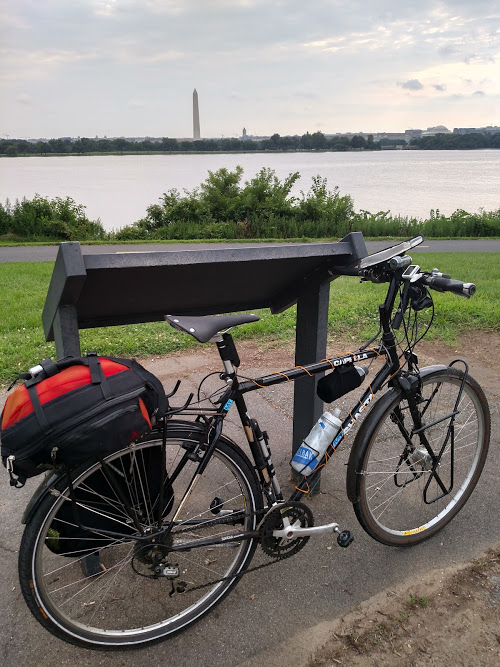 I have been doing a lot of cycling this year. Last Year I hit 3,143.2 miles by the end of the year. This year I hit 3,000 miles by the middle of August, and as of this post I have surpassed last year's mileage record. Every mile from here on out is a new record for a calendar year.
Why is this year so much higher in mileage than the past? A big part of it is that I decided make my default decision for every commute to be to bike, unless there was a compelling reason not to do so. Comfort was not a compelling reason. nor was snow, nor rain, nor extreme temperature. Lightning, distant appointments, equipment failure, and illness were about the only reasons that kept me off the bike with a few exceptions. What I found out was that rain, snow, cold, and extreme heat just aren't that bad. On the days when I didn't bike, I missed biking. On the days when the weather was 3°F or when the heat index was at 110°F it was certainly challenging, but there was a sense of accomplishment in being able to test my limits and find myself up for the challenge. When it was pouring down rain, snow, or sleet I found out it just wasn't that bad. I've even come to enjoy riding in the rain. I have also started to take on the majority of the routine maintenance on my bike, which helps to reduce equipment related time off the bike.
In the Winter, Freezing Saddles helped me to stay motivated in the face of the cold weather and challenging conditions. As of this writing my highest mileage month was January at 455 miles, which is not something I would imagine most people would be able to say. February had my lowest mileage at 349 miles, due in large part to the lack of snow removal on my commuting route. But I was able to get around that by finding new routes and eventually wearing through my studded tires. I've biked in all but one week this calendar year (largely due to illness) and my mileage has been remarkably consistent.
Most importantly, it has been a lot of fun.